We already played with Node-RED and Node-RED Dashboard earlier. Those recipes, which allow you to install those essential components on your Raspberry Pi work fine, yet we see more and more installation questions coming. Time to upgrade!

This is a very easy recipe to install Node-RED and Node-RED Dashboard the easy way, using Docker. Inspiration comes from the official home site, but we have a few extras (and our own Node-RED version) in store. Read on to learn more.

This option is based on this article: Running Node-RED Under Docker (official guide). We just added a few extras for Raspberry Valley use. It is highly recommended to check out this original.

Within a few minutes, you'll get a fully operational Node-RED server running on your Pi!

Wait a bit. You'll see something similar to this: 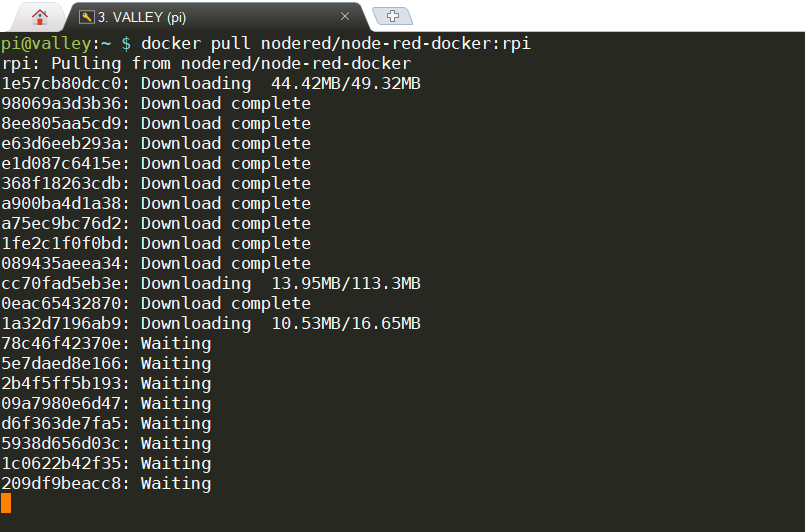 Your server is functional and is accessible via the browser at

and looks similar to this on server (Raspberry Pi): 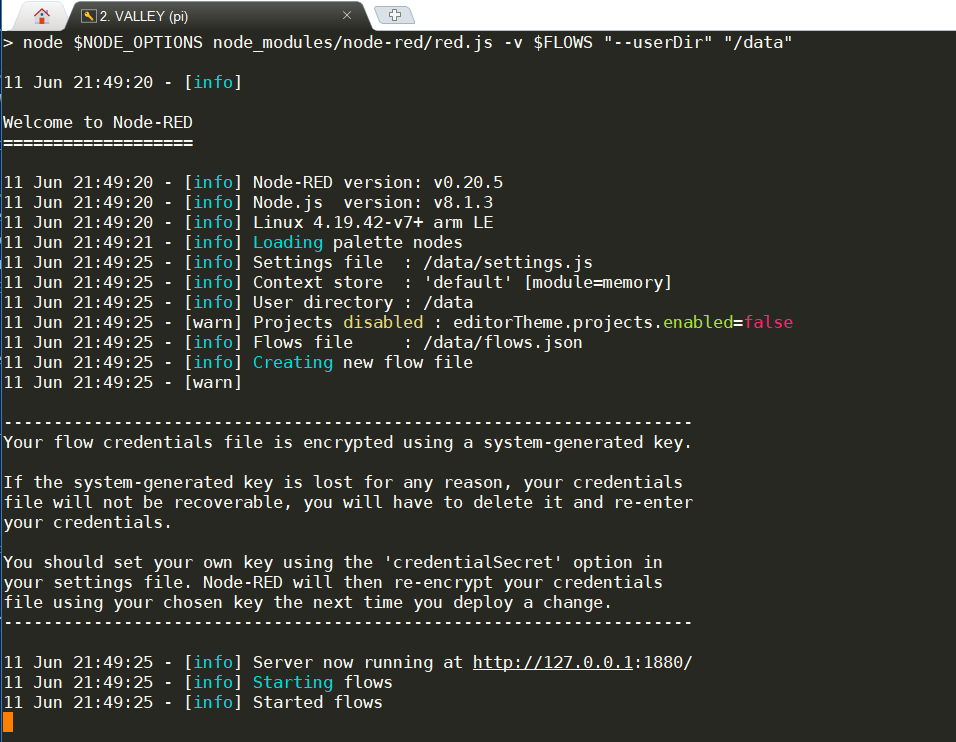 To exit, press ctrl-c on your Pi. The test container will be removed and your changes on test will be lost.

This command creates a container noderedrv on your Pi:

Below are a few useful Docker commands to work with this container: 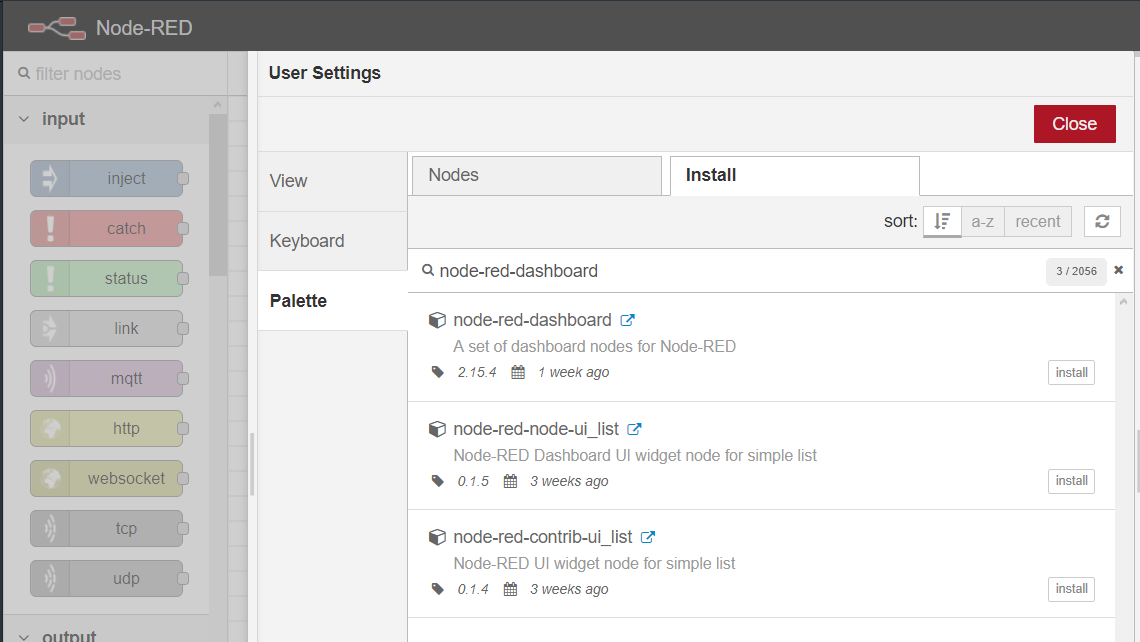 Note: You can install other nodes in a similar way

Option 2 - Our own Node-RED Docker Image

We have created our own Node-RED image, based on the official image. The difference is, that our favourite nodes are added. Please find the Docker image to use here on Docker Hub, The source code on Github and the changelog on the Github repository in README-RaspberryValley.md

Since we have written our approach, in option 1 and 2, and since we have been using Docker on Raspberry-Pi basically everywhere, a lot has changed.

This options takes the official Node-RED image (see the guide here) and installs the aedes node. This is pretty neat: after running this one image, you can use MQTT basically out of the box! No more Mosquitto needed!

While we are not sure we want to use this approach for 'production', it's a great alternative for any prototyping, on any platform; not only Raspberry Pi, but also Windows and others run from the same image (sort of, using the same command to be precise).

On Raspberry Pi, you could run the following:

On Windows, we assume your port 80 is taken, so something similar to this: 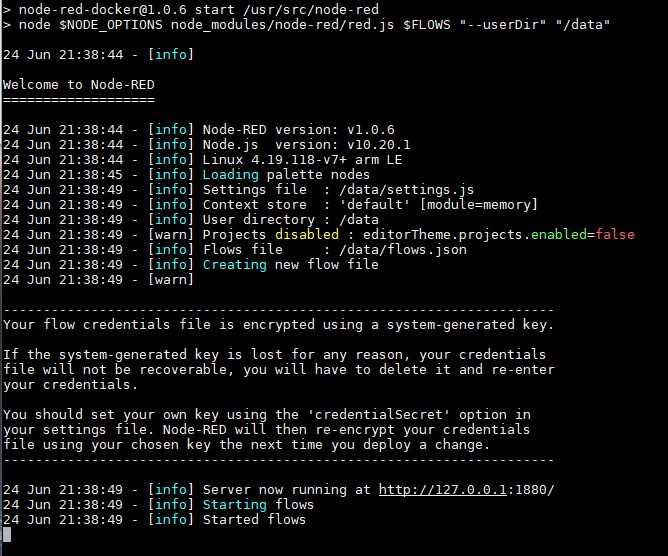 In this image, you can see Aedes running the MQTT server, and the MQTT node listening to messages on topic 'test'

Note: Aedes comes in with a nice feature of a built-in port for enabling sockets. You'll need to fill in a sockets port and all is ready. 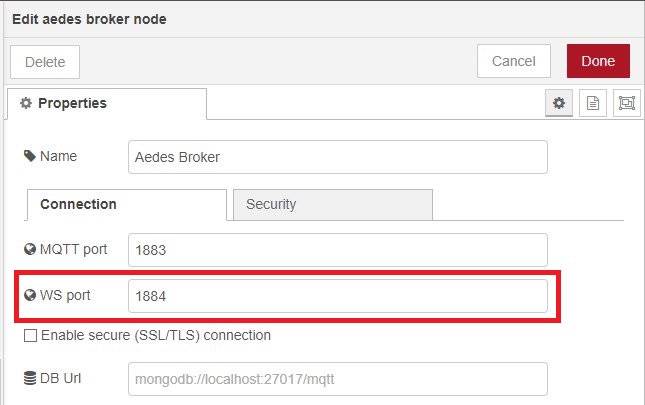 However, please remember, that you need to update the container. So for example for Raspberry Pi, open the sockets port as well, as shown below (we're using the example port 1884).

Here is a bunch of tips to take you from our base configuration further.

You can modify the container behavior by using the update command. This applies to any Docker container. However after finishing the steps above, you need to manually start the container. So let's automate this.

To set autostart properties, use this command:

In our case, this boils down to: